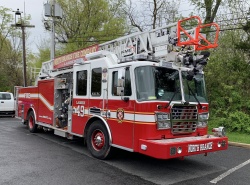 The year was 1927. A local baseball team found that they had a surplus of money collected at each game from spectators. They searched for a worthy cause and decided that a fire company was sorely needed to improve fire protection in the northern end of Branchburg and the western end of Bridgewater. With additional monetary help from prominent citizens such as C.V. Bergen and F.C. William, they pooled their resources and bought a 1924 Model “T” Ford Chemical truck. They painted it red, added ladders and hoses (it already had a tank) and christened it “North Branch Engine #1”.

Thus was born the North Branch Fire Company. Engine #1 was housed in a garage located in the rear of a “downtown” North Branch property owned by F.C. Williams. His family would play an active part in the fire company for decades to come. As was inevitable, the predominantly farming area served by North Branch continued to evolve and the emergency service needs grew.

In 1936, at the height of the depression the hard working volunteers were able to purchase a new diamond “T” Smoke-Eater 500 gallon per minute pumper. From 1936 until 1950 the Diamond “T” was housed in a local gas station owned by Mrs. Fanny Skillman.

Through 1950, fire company meetings were held in a variety of places such as the Craftsman Lodge, the North Branch Inn dining room and even in back yards. In that year the company purchased the local grammar school from the Branchburg Board of Education. The address was 1047 Route 28, just a few doors from the North Branch General Store. The first addition to this building lead to a three bay firehouse, on the east side of the building. The addition was just in time to prepare for an expanded fire company as 2 new GMC 750 gallons per minute pumpers were purchased in 1954 and 1959.

Mrs. Skillman was the “Telephone Alert” person who would receive word of a fire by phone or messenger and relay to the volunteers, most of who lived and worked near by. She performed this valuable service until 1955.

In 1955 the fire alarm center was moved to the North Branch Inn, which was right next to the Raritan River on Route 28. Mrs. Josie Tronzinger, owner of the Inn, and her family would serve as “First Alert” during this period when radios were also introduced to speed communications and reduce response time. During the day, the “fire” phone rang at the Inn. At night, the calls went to a phone in Mrs. Tronzinger’s bedroom.

In 1964, a used 1954 Dodge Power Wagon was purchased from a local well drilling company, Dinuni Bros., and converted into a brush truck. In 1965 a three bay wide and 2 bay deep addition was added to the west side of the building to make room for the growing fire company. With the fire company and its needs growing, a pickup truck was purchased from Country Hills VFC in 1967, to accommodate carrying surplus equipment that could not be located on any of the engines.

Other vehicles followed including a then “state of the art” 1250 gallon per minute 1971 Hahn pumper, which was set up with 2000 feet of 3 inch “supply line” hose to necessitate a growing area, with limited fire hydrants. A 1981 Pierce 1250 gallon per minute pumper was purchased to replace the 1959 GMC, and upgrade the fire service to be more in lines with the needs of the community. This pumper was refurbished in 1995, to enclose the cab, along with other minor upgrades, to better protect the firefighters responding to fire calls. With the area growing, and more of the proposed and under construction developments being condominiums and townhouses, and E-One mini-pumper was purchased in 1991, to better protect the projected relative closeness of the buildings to each other.

1993 would be an important year. The fire company had outgrown the space at 1047 Route 28 and was badly in need of a new firehouse. Ray Bateman, a long time supporter of the fire company, was instrumental in arranging with Somerset County for the long term lease on a two acre piece of county property at the south east corner of what was the called the Somerset County Community College, since renamed the Raritan Valley Community College. The company’s new address became 1169 Route 28. The shell of the building was contracted out, but a great deal of volunteer fireman sweat and labor went into the monumental task of completing the new North Branch firehouse.

This task was completed with 11 years of saving for a new building, a very successful building fund drive kicked off by Mrs. MaryLou DesChamps, with a large donation, and continuing donations of materials, labor, and equipment, by the businesses and residents of the area.

Up until 1995, the North Branch Fire Co. owned all firefighting equipment. In 1995, Branchburg Township purchased a Pierce Dash 1500 gallon per minute pumper, 49-102, for the exclusive use of North Branch.

In 1999, after a yearlong range planning activity, the North Branch Fire Company decided to purchase a heavy-duty rescue vehicle. This unit was designed to meet the long-term needs of the company and the community. 49-155 is a 22’ walk-in box mounted on Mack chassis. It holds a host of rescue tools including the Jaws of Life. 1999 also saw the addition of an Incident Command Vehicle, a 1999 Ford Expedition, 49-162.

In 1996, the Fire Company became a member of Bridgewater Fire District #3. In 2001, the Bridgewater voters in District #3 voted to purchase a new truck for the use of the North Branch Fire Company. The company took delivery of a 2002 Seagrave 2000 gallon per minute pumper in 2002, designated 49-108. In anticipation of the new truck, the company donated its faithful 1971 Hahn to Suwannee County Fire District, a distressed fire company in Florida with a $3000 per year operating budget.

Our Plan for the Future

Over the years, we have seen explosive growth in Branchburg and Bridgewater Townships. Thousands of acres of farmland have become residential as well as commercial and industrial buildings. As our communities have grown and prospered, so too have Emergency Services needs. A hundred calls for service just 20 years ago is now over 600 calls per year. The North Branch Volunteer Fire Company continues to grow, as needed, to meet the needs of our community.

This site has been viewed 137,174 times.
Events
Pictures
Apparatus
Maintained by the members and staff of North Branch Volunteer Fire Company. Designated trademarks and brands are the property of their respective owners. Copyright © 2006-2022. YourFirstDue Inc. All Rights Reserved. Content on this web site is supplied by North Branch Volunteer Fire Company. YourFirstDue Inc. cannot be held responsible or liable for any content, text, pictures, or any other media found on this web site.
Management login
Powered by